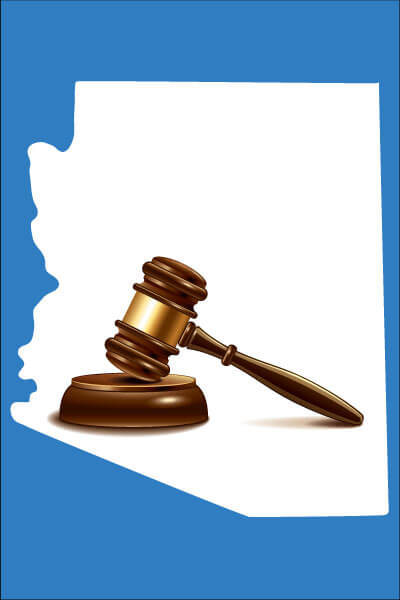 While there are a few federal regulations for the title loan industry, for the most part each individual state is able to set up its own title loan laws. This means that how title loans work can vary significantly from state to state. Due to Arizona title loan laws, it’s one of the more borrower-friendly states to get a title loan, although that still certainly doesn’t make a title loan or a registration loan in Arizona an affordable option.

A title loan is what’s known as a secured loan, and secured means that there is a form of collateral attached to the loan. In this case, the collateral on the loan is the borrower’s car, which means the title loan company is able to repossess the borrower’s car if a default on the loan occurs. An unsecured loan, in contrast, has no form of collateral attached, which means the lender has no recourse besides sending the bill to collections if the borrower defaults.

The requirements to obtain a title loan in Arizona are fairly relaxed, although they will vary from lender to lender. The only two real requirements according to Arizona title loan rules and federal law is that the borrower have a government-issued ID and a car in their name with a lien-free title. The government-issued ID is necessary so the lender can check the borrower’s age, because it’s a federal law that title loans can only be issued to those who are 18 years of age or older.

The title loan company determines the maximum amount they’re willing to lend the borrower based on the current market value of the borrower’s car. The maximum loan amount will typically be a percentage of the car’s trade-in value, such as 30 or 50 percent, but this will depend on the lender. Arizona title loan laws don’t regulate the maximum amount that a title loan company can lend out through a title loan, so if a borrower has a car with high enough value, they can get thousands or tens of thousands of dollars. The lender verifies the value of the vehicle by performing a quick vehicle inspection before issuing the title loan. This is just to make sure that there aren’t any glaring issues that could detract from the car’s value.

While many states require that the title loan company holds on to the borrower’s car title to secure the loan, Arizona has not required that, so a lender may or may not require the car title from the borrower. The state’s laws are somewhat open to interpretation in this regard, but the consensus is that title loan companies are able to make loans to borrowers who don’t have the titles to the cars they’re putting up as collateral, although this can obviously be risky for the lender.

Arizona title loan laws don’t stipulate that the title loan company checks the borrower’s income or any other information besides their age. However, each title loan company will have its own policies in this regard. Some will simply ask about a borrower’s income and allow the borrower to provide an estimate. Others will require proof of income, in which case a borrower can bring in their latest paystub, a bank statement or another form of income verification.

Other title loan requirements in Arizona, depending on the lender, could include proof of full coverage insurance and even personal references.

Here are the maximum title loan interest rates in Arizona and the corresponding loan amounts for these maximums:

Obviously, these loans are some of the most expensive on the market. Any borrower used to loans through a bank or credit union will likely get sticker shock just seeing the APR on a title loan. However, these interest rates are actually some of the lower ones available in the nation. Since many states don’t have a limit on title loan interest rates, it’s not uncommon to see title loan companies charging monthly interest rates of 25 percent or more, which results in an APR of 300 percent and means that on a 1,000-dollar loan, the borrower is paying 250 dollars every month in interest charges.

Why are title loan interest rates as high as they are? According to lenders, that’s the only way that they can make a profit and afford to issue loans to high-risk borrowers. The fact is that the majority of title loan borrowers are people with bad credit scores who are unable to obtain a loan through a bank, credit union or another financial institution. Title loans fill a need for people in that kind of situation, but they come at a price. They also often leave people trapped in a cycle of debt, as they can only pay off a portion of their title loans each month and end up building a higher and higher bill due to interest charges.

Arizona is one of the few states that has regulations in place regarding contracts for title loans. The state requires that every title loan contract include the name of both parties involved, the borrower and the lender, along with the location of the title loan company and the borrower’s home or business address.

If the borrower doesn’t make a title loan payment, then the lender is legally able to charge a late fee of up to 5 percent of the unpaid balance on the installment if it isn’t paid in full by the 10th day after the payment due date.

Let’s say that the borrower takes out a title loan for 1,000 dollars for a 30-day term at the Arizona maximum of 15-percent interest, which is likely, because title loan companies almost always charge as much as they can. The loan’s monthly interest would be 150 dollars. If the borrower didn’t have the 1,150 dollars to pay off the loan at the end of the term, they could pay only 150 dollars and start a new 30-day term with a new 150-dollar interest charge. Unfortunately, this ends up occurring with the majority of title loan borrowers, as the average amount of time it takes a borrower to pay off a title loan is eight months. In the aforementioned example, after eight months the borrower would have paid 1,200 dollars in interest for a total of 2,200 dollars paid on a 1,000-dollar loan.

If a borrower defaults on a title loan by failing to make their payment, then that gives the title loan company the legal authority to repossess their car. There could also be other ways that a borrower may default on a car title loan, which will depend on the borrower’s contract. Some title loan companies include in their contracts that the borrower must maintain car insurance on the vehicle used as collateral or put in other requirements. The most common way to default, though, is through missed payments.

When it comes to title loans, Arizona isn’t the best state, but it’s certainly not the worst, either. Arizona title loan laws provide some form of borrower protection, but despite that, title loans are still a bad deal for borrowers due to their high interest rates.

The reality is that there are very few states where borrowers can get anything approaching a reasonable interest rate on a title loan. Even in Arizona, where title loan interest rates are regulated, the APR is still well over 100 percent. Title loan companies say this is because they are lending to high-risk borrowers, although this explanation doesn’t make much sense. After all, borrowers are putting their vehicles up as collateral for their loans. The title loan company can repossess the borrower’s vehicle in the event of a loan default to recoup its losses. Even if some borrowers make repossession difficult, title loan companies should be able to repossess vehicles for most title loan defaults. And as long as they didn’t issue loans that were too large, they should then make their money back on the vehicle sale.